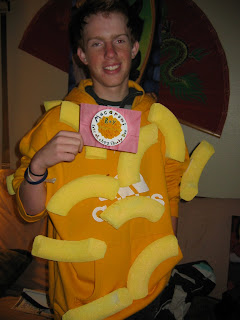 I'm conflict avoidant. I can't talk about it. Really, I am.

Everyone's been talking about Laurie Berkner. Okay, not everyone, but still--people I think are important are talking about her. (That was who *I* think; not, who I *think* . . .)

I haven't thrown my indie kid music hat into the ring yet because 1. (See opening line) and 2. I've been chewing on the whole thing. There's something in the conversation that I'm not sure we ever got to (maybe because it sort of heated up ever so slightly, and I might not be the only person who tends to ditch the kitchen when the stove's on high).

I think Mrs. Davis kicked off an interesting conversation about artistic legitimacy, actually.

Her bent--as this reader understands it--is not that Laurie Berkner is crummy (which seems to be how most reader's interpreted what Mrs. Davis said) but that her not-crummyness is shared by others, while her get-paid-to-do-that-all-the-time is not.

Here's a story. (As far as you know, it has to do with what we're talking about.) When I was in graduate school studying poetry, these published poets used to come to our workshops and read their work and then we'd have a Q & A and within the first three minutes somebody would ask, "How do you get published?" The published poet then inevitably launched into a sort of there-must-be-beer-in-the-air-I'm-so-relaxed kind of discussion about how it's not really *about* getting published, man.

And I always wanted to get up and yell BUT YOU'RE PUBLISHED.

I didn't, of course. I just set out to get published . . . like we all did. And it was really hard. And by the time the three years of that two-year program were over, I’d written scads more than I’d ever published. Was I a poet if I wasn’t published much? I really wanted to keep writing poetry.

Ten years later, I’m still writing poetry. I haven’t published much at all since those years in grad school. Here’s what I’ve done, though: I’ve decided that it’s okay for me to write poetry. And in my life I’m trying to point myself toward the sign that reads YOU GET TO SAY WHAT YOU'RE GOOD ENOUGH TO DO and away from the sign that says IF YOU GET A CHECK, THEN THAT MUST MEAN YOU WERE GOOD ENOUGH TO DO IT AFTER ALL.

I give an absolute high five to Laurie Berkner for going for it in her wildly goofy kids music. But the cash she's made isn't what inspires me or makes me think she's great. It's the "chops" she showed for just recording her songs in the first place.

May we all have chops. May we all record our own goofy songs. May we all not wait for our bank accounts to tell us we're good enough. Amen.
Posted by --ginger. at 12:38 PM 3 comments:

Am I a Good Parent?

I ask this question all the time--to myself (don't worry--not to my kid). Here's the blessing I got the other day in the car. It was a spontaneous recitation by my four-year-old. He was apparently trying to show me that he knows what's what:


#1 (And he did announce the numbers): No tv before school.

#2: No little boys going on the computer to check emails.

#3: No going into somebody else's house


My question is finally answered. You know what you need to know, grasshopper.
Posted by --ginger. at 9:17 AM No comments:

Have a Super New Year 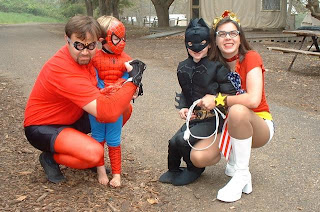